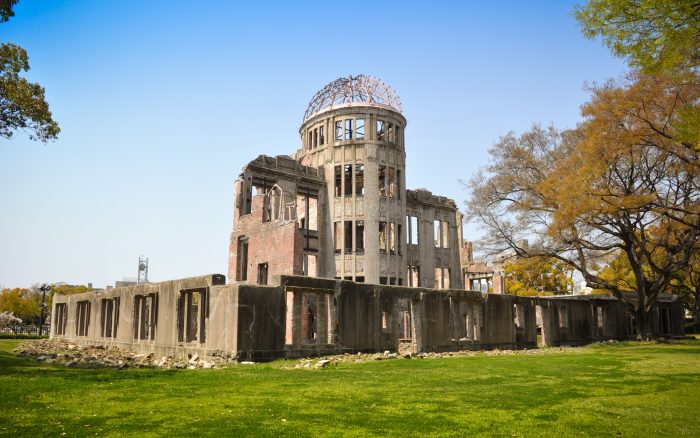 In October 2017, I was invited by the BBC to interpret an interview with Tokuko Kimura, a Hiroshima atomic bomb survivor, or ‘hibakusha’, aboard the Peace Boat. This is a Japan-based international NGO that promotes human rights, environmental protection and sustainable development, and is one of the many partner organisations of the International Campaign to Abolish Nuclear Weapons (ICAN), which won the Nobel Peace Prize that same year. The prize was accepted in Norway by Setsuko Thurlow, a nuclear disarmament campaigner and another Hiroshima hibakusha. Only a short time had passed since I completed this assignment, and so I found myself still awestruck and emotional when listening to the BBC report.

Among the various assignments that I’m invited to perform, I get an extra boost from TV and radio. This BBC job was a same-day request. When it comes to the media, especially major stations like the BBC, many, if not practically all, of the requests are as follows: “The job is today—when can you be here?”

It was the weekend, and I was at home preparing for an upcoming assignment when the BBC called. I confirmed the topic and decided that I could handle it. Two hours later I was onsite, and the work had begun. The director and editorial staff were in the editing room working on the dialogue while I watched the video and interpreted for them. As the programme would be broadcast in English, I assumed that once the script was done, a BBC reporter would perform the voiceover.

Instead, the just director turned to me and said “OK, Rie. You do voiceover, don’t you? Shall we start?” And that’s how I ended up doing English voiceover for the BBC. Unlike a live performance where there is no time for re-takes, video can be repeated over and over in the studio. Thus, I was able to match my voice to the recording and get the director’s feedback until we had a good version, and my translation was then added to the report.

Each year the Swiss village of Caux, near Geneva, hosts international conferences at its Mountain House venue. I have now attended three years in a row, ever since my first time there interpreting speeches and presentations for the Hiroshima Day remembrance on 6th August 2015. This date commemorates 70 years since the end of the Second World War and so, as with the previous BBC voiceover, the moving nature of the subject matter meant that I could feel my emotions getting the better of me as I sat in the editing booth. If an interpreter allows themselves to get choked with emotion, the audience won’t be able to understand them, and so there is a lot of pressure to control your breathing and remain calm. Although these kinds of assignments can be very hard, I have found them to be memorable and deeply rewarding.

A particularly hard day at the office

I suspect that all interpreters have their fair share of stories where they had to overcome problems and issues during assignments. There are various challenges facing an interpreter, and many episodes spring to mind, but when it comes to UK-based jobs, one particular instance of cultural misunderstanding sticks out.

I was interpreting a presentation for a Japanese delegate who had flown in specially to interview UK government agencies about procurement and competition. The small room was packed with government representatives. But no sooner had people taken their seats, than my delegate launched into his speech.

I immediately felt this was a bad way for him to begin. Although uneasy, I kept taking my notes, waiting for him to stop talking so I could interpret for the audience. But then, without a moment’s hesitation, a British representative interrupted: “Look, why don’t we get to all that after some introductions? There are drinks too, tea, coffee or water. What would you and the delegate like?”

The Japanese delegate looked puzzled. If it had been possible beforehand, I should have advised him that “When in Rome, do as the Romans do.” It is important to build rapport with your audience through small talk and introductions, and then, only afterwards, do you move onto the real reason for the conversation. If you neglect this cultural element of interactions, audiences, such as those in the meeting, can become frustrated or receive a negative impression of the speaker. However, it was too late; the delegate had dived straight into business with no preamble, and the damage was already done.

An interpreter isn’t responsible for what the speaker originally says, but it still feels like a real shame when a client has travelled from far away and yet fails to build rapport and take full advantage of an opportunity. This can be a painful experience. Even though it is not the interpreter’s fault, one can’t help but feel a little defeated.

I believe the British manner of speaking to be more euphemistic than other English-speaking countries. This differs from person to person, of course, but I find that British people generally tend to avoid making direct statements. This means that sometimes two parties exchange greetings and small talk in their respective languages, and it may seem that they do not need to be interpreted because they are vague and indirect phrases. As a result, a Japanese client may find it difficult to decipher the true intentions of a British person’s speech and may not realise when they are missing subtle nuances or cues, as in the meeting I mentioned above.

The American comedian Patrick Harlan, better known in Japan as ‘Pakkun’, once said to a Japanese audience that there is no divide between one’s honne (true intentions) and their tatemae (facade) in English language and culture. But I believe that this does exist in the UK, and may even be stronger here than in Japan! Even within Japan, this tendency can vary depending on the region, social hierarchy and individual; likewise, in the UK, it can vary depending on region or class.

Since I moved to the UK in 2007, there have been countless instances where I’ve thought to myself, “Wait! Am I being rude?” For example, if I made myself a cup of tea or coffee, but only for myself and not for the other person, would people think I was oblivious to UK manners? I know now that British people almost certainly ask other people if they want anything when going to make a drink for themselves.

When I’m now asked if I’d like a drink, contrary to what you’d expect, I now know that the person is telling me that they would like a drink (there are times, of course, when the person asking is simply concerned about your well-being!). When I had just arrived in the UK and was still new to its culture, I admit that it took a while before I realised what was really going on here!

During another assignment, the participants included a group of Germans. I enjoyed chatting with them during the breaks as they all spoke very good English. However, they had brought a German-English interpreter for the meeting itself. I tried to delicately ask the German interpreter about this. I wondered how this question would sound coming from a fellow interpreter but was eager to know why his clients decided to bring an interpreter along when they already spoke such good English.

I did not think that this was strange so much as simply wanting to know the real reason. I wanted to hear it from the mouth of the interpreter himself. He explained that he had spent a long time living in the UK. The interpreter went on to say that German people were aware that they occasionally came across as unintentionally brusque or rude, simply due to linguistic or cultural differences.

So, he explained, my client wants me to interpret their German into the most appropriate and nuanced English possible to avoid any cultural misunderstanding. It’s hard to describe the impact this had on me. How wonderful and enviable! I thought. If only some of my own customers were this client-educated and culturally aware!

Did this post remind you of any of your own experiences? Be they good or bad, share your ‘unforgettable’ experiences in the comments!

Let me know in the comments.