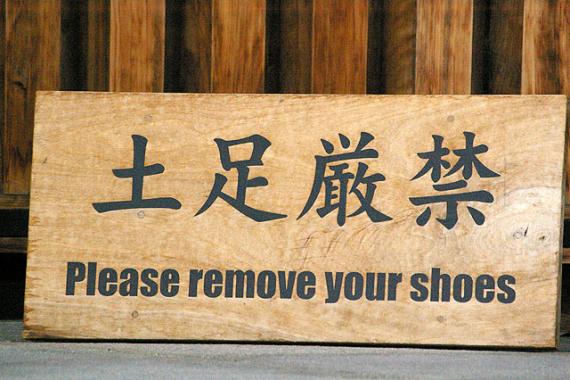 In the last blog post, I introduced the first half of this article.  I mentioned Japanese Curry, Climates & Local Foods, the National Flower, Population and the Language in Japan.  This week, I am going to continue by starting with the 6th item.  For the previous part, please read 1 of 2 for “11 Things You Thought You Knew about Japan.”

When you go to someone’s house you are expected to take off your shoes.  I believe quite a lot of people know this already.  But did you know you’re supposed to turn the shoes heels against the edge of the Genkan – Japanese entry area of the house? Your shoes should be facing the exit.

When you’ve done that, you can proceed to the rest of the house.  The reason for doing so is for efficiency, as well as manners, to keep the shoes tidy and in the direction of going out that you don’t have to look for your pair being all over the place even when there are many shoes.

However, there is an exceptional occasion.  Mind you this might be trivia so not every Japanese person knows this.  If you’re going to a house on an occasion like funeral or a wake, don’t flip your shoes against the edge of the entry area of the house.  Some people say the spirit of the deceased will follow you as they see your shoes being ready to leave efficiently and quickly from the occasion.

At the funeral it is common that you’ll be handed a sachet of salt.  When you go home, before entering your house, sprinkle the salt over your shoulders and be conscious to leave the funeral or wake behind and not to bring it into your house.

There is an area next to it where you can wash yourself with removable shower head, a stool where you can sit in front of a mirror to wash your face, head and what have you.

Bath water in the tub is usually shared typically among family members and even with guests if they have them.

It is manners to keep the water reasonably clean by picking up hairs and other stuff before you leave the room.  For guests, it is courteous to ask them to take the first turn to take a bath while the water is fresh.  A lot of times, small children get in the bath together with their parent and it is a time and a place to communicate.

Tattoos might be perceived as fashion or personal statement, but in Japan it means something different. To be exact, it is practical to distinguish in two categories: 1. Traditional Irezumi and 2. Tattoos.  The second one is more of a recent thing, a fashionable style with Western influence.  For convenience, please allow me to distinguish them by calling them differently in this article.

The traditional stuff — Irezumi — is deeply associated with Yakuza, Japanese mafia, and it is seen and considered antisocial.  Nowadays, a lot of (young) people have ‘tattoos’ for fashion than representing their tribal association with Yakuza.  However, both Irezumi and Tattoos are received negatively and it can be a problem if you love Japanese public bath because tattoos are usually banned.

I love public baths, especially Onsen (hot springs/spa).  So, I will never risk that by putting tattoos on my body.  Why they’re banned?  That’s a good question, actually.  I hear it is because Irezumi/tattoos intimidate other customers and scare them away.  But I know for a fact there is also sanitary and clinical reasons especially when tattoos are new, and the public bath owners do not want to be liable or involved in such troubles either.  Let alone they don’t want to be associated with negative image it conveys.

When we say tea in Japan, it can mean from Green Tea, Brown Tea, Red Tea (normal tea in England) to all other sorts.  Green tea, for example, is appropriate for many occasions, but the major misunderstanding is how to make it.  Unlike other kinds of tea, green tea requires a more delicate approach to savour it to the full extent.  I’m sure there are other ways but this is what I do with green tea.

First, it is important to know how to store it.  I store green tea leaves/bags in the freezer, not in a cupboard at room temperature.  Because the leaves go yellow we call it ‘leaves catches a cold’ and basically the flavour is long gone by the time it gets to this stage.  You don’t want that.

Now, let’s make tea with fresh green tea leaves.  Please note, don’t use boiling hot water, because it’d be too hot.  Instead, bring it to boil but wait till the water temperature is around 70 degree centigrade.  And then quietly pour into the pot with tea leaves.

How would you know the water is cool enough but I don’t want to use a thermometer?  Mix cold water!  Don’t tell this to tea ceremony gurus, they might not like it.  Hard water is not ideal for green tea anyway, don’t be a perfectionist – be practical.  This is just a quick solution but it helps.

Brown tea, called Houji-cha or O-ban-cha, is very easy to drink after a meal.  It is mild but not sweet.  It is one of the first drinks given to even babies, of course it will be lukewarm or at room temperature when given to them.

In summer, barley tea — Mugi-cha — is made and stored in the fridge in many households.  For the past decades, Oolong tea has become also popular.  Oolong tea is made from tea leaves but barley is not.  Barley tea is caffeine free and it contains a lot of minerals.  It is healthy and particularly nice chilled to drink after a hot and long summer day.

Here’s one of my school time memories.  Children take barley tea frozen in their flask to school to drink after PE or other sports activities.  The frozen tea will thaw while they are busy attending lessons, and when there are allowed to take a break, they dash to their flasks.  It is such a rewarding moment.  Tea is slowly thawing but is still perfectly cool and chilled.  Kids love it when they come back from playing sports outside all day. (They’re not allowed to drink beer yet… lol)

New Year is called お正月 Oshogatsu or 正月 Shogatsu in Japanese, and it does not just mean the first day of the year but the first MONTH of the year.  The second character of 正月(Shogatsu) –so月 –means ‘ month.’  This character means the Moon.  It is the first character for Monday 月曜日 for obvious reasons.  This character is pronounced either gatsu or tsuki, as it changes its reading depending on the context.

“Do they know it’s Christmas Time At all?” –  Ohh yes, we do.  We do celebrate both Christmas and Valentine’s Day, but we just do it ‘slightly’ (?) differently.  How different is it?  For example, Christmas is definitely the most important national holiday in Christian countries, but in Japan t is not a holiday.

Having said that, a great many people enjoy it as a very joyous, festive season.  The streets, buildings, shops and some houses are decorated with lights – this part is quite similar to the West.  However, one BIG difference I would say, or even odd (?) difference might be, we don’t eat turkey.

We BUY a substitute from somewhere.  This somewhere is – KFC – Kentucky Fried Chicken.  If you get to spend Yuletide in Japan, you’ll probably see KFC adverts on TV all the time. It is absolutely one of the biggest campaign season for them.   They’ll be sending out messages “Speaking of Christmas, it’s KFC. Let’s have KFC for Christmas.”

I might have been living in the West for too long.  I can’t spend Christmas without Christmas Dinner.   I even miss Pumpkin Pie on Thanks Giving where I don’t even live in the states!!  There is another reason why Turkey or Goose are not common in Japan.  It is not because they don’t like them.  It is because not many houses have an oven – That’s why!

Valentine’s Day in Japan is interpreted even more differently.  The original meaning was, not quite lost in translation, but construed differently.  Besides, I’m not sure if people know the actual meaning of the day.  I really think any average Japanese person probably has never thought about it.  There is no doubt they will not think of the martyrdom of the Saint Valentine, before thinking of chocolate.

But why chocolate?  There are several theories.  Whatever the truth is, definitely it is the day you will see enough chocolate to even put off a choc-freak.  St Valentine’s Day is, for girls, they ‘have-to-buy-chocolate’ day, and for boys it is the ‘have-to-receive-chocolate-or-you’re-a-sad-individual’ day.

St. Valentine’s defiance in performing marriages in secret for young lovers, somehow turned into the day that ‘even’ girls are allowed to make confession of love to boys.  Where it would be considered daring otherwise.  They are ‘allowed’ to be proactive for the day.  They’re encouraged to give chocolate to the men they fancy.

This may be a serious day for teenage girls and boys, but in general, it is more of a custom.

Some people argue it was because of Morozoff, one of the major confectionery & cake companies in Japan, who introduced St. Valentine’s Day to the country, and that other confectionery companies followed to promote their sales.

Be it true or not, and whether I like the idea or not, chocolate for St. Valentine’s Day and that it is always that girls have to buy for boys has not changed for a long time.

For more information on St Valentine’s Day in Japan, see Giri Choco (obligatory chocolate) and other variations of chocolate giving.