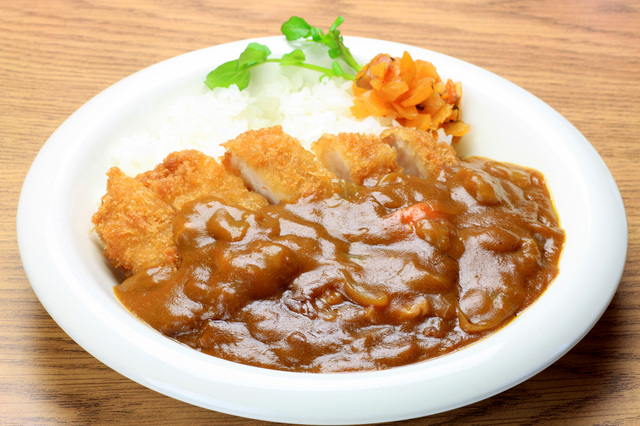 Living in the UK, I sometimes hear people in the streets talk about ‘Katsu curry’ – but in a way that is slightly strange to my ear. Not all of them, but sometimes, people talk about it as if there is a kind of curry sauce called Katsu Curry. They refer to it, for example, “I would like the Katsu Curry type of curry sauce”… hmm

It makes someone like me, who contemplates on words all the time, think and wonder why and how they landed on this notion of Katsu Curry as a type of curry:

“Does this mean they didn’t quite get Katsu by itself that it was referring to the ‘cutlet’ – meat battered and deep-fried (or often oven-grilled in London)?”

The Japanese word, Katsu, comes from Cutlet, which is fairly obvious to Japanese nationals, whereas what’s obvious to someone might not be so obvious to others, and that’s the truth often forgotten. Then, let’s not forget it here.

In the Japanese language, such abbreviation as ‘cutlet’ becoming ‘cut’ happens so often. ‘Cut’ is pronounced as Katsu in Japanese pronunciation, with a vowel after the consonant ‘t’ as we almost always (but not strictly always; as a Japanese diction expert, I can write an essay about it, but I wouldn’t do it here, or today anyway) have to have a vowel after every consonant.

A good example of this type of abbreviation is the word ‘Pokemon,’ it is an abbreviation of Pocket Monster(s).

The Japanese language is full of such abbreviations! Even in London, local Japanese nationals have developed original abbreviations such as ‘Sau Ken’ for South Kengsington and ‘Japan Sen’ for Japan Centre… lol

Katsu usually means a pork cutlet battered with panko (bread crumbs) and deep-fried: in other words ‘pork cutlet’ is the norm for Katsu, therefore it doesn’t need to be specified that it is pork and not chicken or any other sort of meat.

The kind of curry sauce that accompanies Katsu is Japanese style curry sauce, by now you should know it is not ‘Katsu curry sauce’ – however, did you know it was first introduced by the Royal Navy?

Original curry in Japan brought into Japan via Royal Navy

To this day, it has been available for you to try its claimed-to-be original taste by original recipe at Yushukan (遊就館) in Yasukuni shrine, Tokyo. I tried it there several years ago, and I found it a little bland to be honest, compared to Japanese curry we would find in Kareh Raisu, although, it was somewhat nostalgic as it said to be it would be.

Kareh Raisu (=curry rice) comes in almost all shapes and forms these days. It is most certainly a favorite and common restaurant dish all over Japan, so it is in the home. Every household has its own signature recipe, so I love it when I am invited to a friend’s house and to try their home made Kareh Raisu. Interestingly, there’s something very homely about it.

In my house, by the way, our favorite curry roux is “Java Curry” sauce. There are green, red and black packages. Unfortunately, the black package is only available in Japan – so far as I know. However, the black one is special, although both green and red are nice. Green one is mild/hot and red is hot, by the way.

We have tried other curry roux but Java was by far the best. In supermarkets in Japan, you are spoilt with choices: curry roux can be in block (standard), granular and powder, and you can choose whatever suits your taste, and the dish you wish to make for that day.

What about curry from India, and nothing to do with Katsu?

Curry from India or that sort of style is differentiated from Kareh Raisu in Japan. These kinds are largely called Indo Kareh (Indian Curry).

I’m not sure if people in general further differentiate it into Indian or Nepalese, as I assume Nepalese curry or Gurkha curry might just fall in the category of Indian curry in Japan. As it happens, I used to go to a Nepalese restaurant which was in the neighbourhood when I was still living in Japan, and I would love to visit Gurkha curry restaurant in Hokkaido (northernmost island in Japan) on day.

Let’s talk about Katsu from here. Katsu appears in various dishes as well as Katsu Kareh. There are:

The versatility is similar to schnitzel, I guess…

Another reason why Katsu (Kareh) is popular in Japan is to do with the word and the sound of Katsu. Katsu means ‘to win.’ Whether it is conscious or not, Japanese people believe in Kotodama, and people associate the positive energy by consuming Katsu to gain power to win.

To me, it resonates with the teaching of a self-fulfilling prophecy. It can work positively as much as negatively; consuming the energy of winning (=Katsu) is indeed an act of affirmation.

I shall be more mindful of affirmation, next time I consume Katsu Curry!

Oh yes, what is the Japanese word/phrase or its pronunciation you wondered or found intrigued to find out, or perhaps its meaning & background?